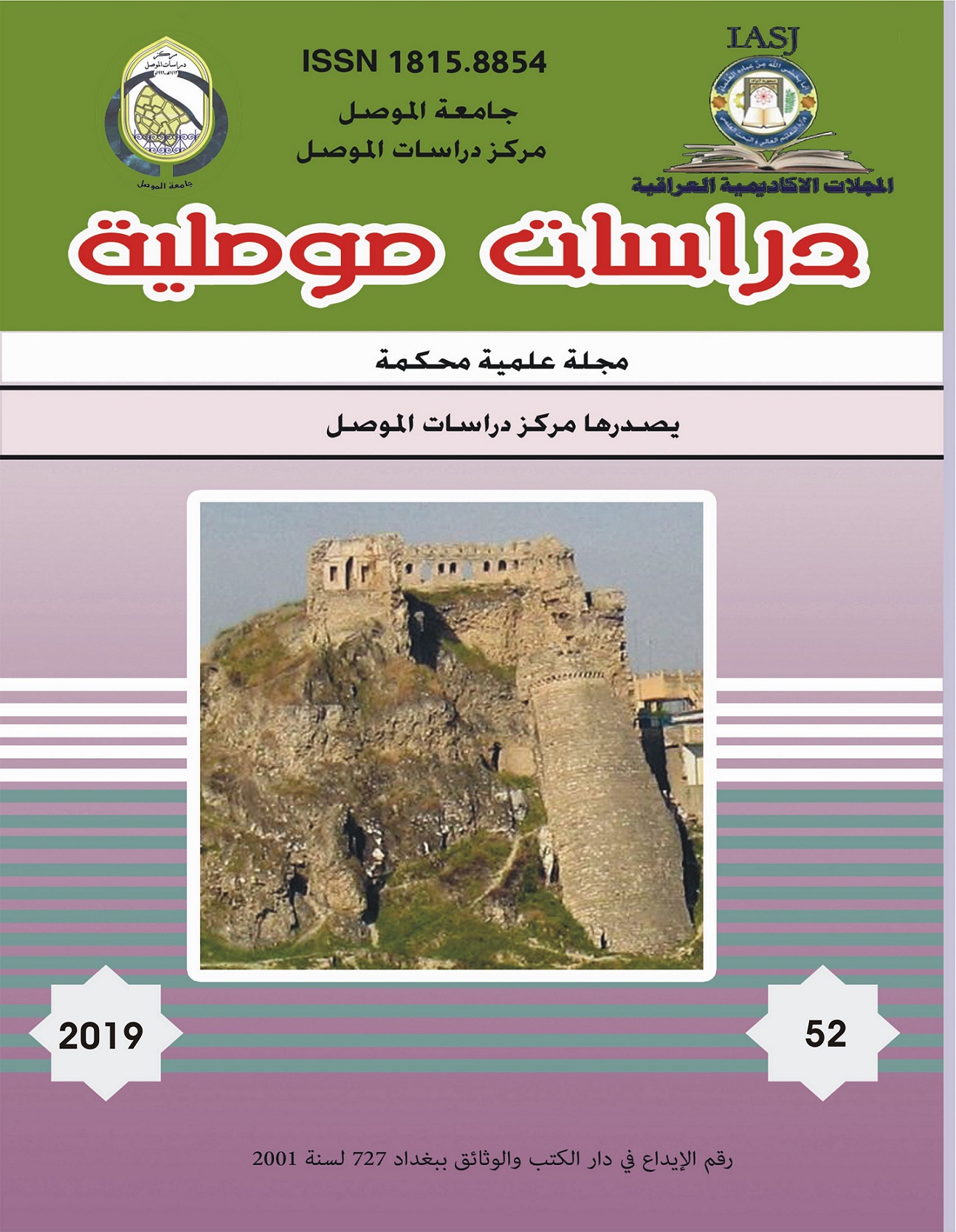 The topic "Mosuli Woman and her Social Role in Mosul Since 1834 to1918"is one of plenty topics that have not received much attention from researchers and specialists. This study sheds light on the Mosuli woman and her social role in all aspects of life in education, Auqaf (endowment) and sanitary during the study period. Moreover, because of ignorance and wrong beliefs that had widespread at that time, some women fell back on religious vows because they believed that this vows might help them to keep their children alive. Women also believed in magic in order to get her daughters married or to find a good job for her husband or son. Women also endeavored, by using magic, to break up others families, by divorcing a woman from her husband and vice versa. The abstract includes an introduction and a review of the research axes.

Trade in Horses in Mosul in the 19th Century

In the 19th century, Mosul became one of the largest exporters of pure Arabian horses to British India. Its horses are characterized by beauty, agility, speed of running, endurance and other characteristics. This has led many people of Mosul, especially nomads, to take serious interest in horse breeding, a group of traders specialized in the sale and purchase of horses from Mosul, its adjoining areas, and other parts of Iraq, and then they export them to India and make huge profits. The research divided into two axes: The first one is concerned with horses breeding places in Mosul and adjacent areas, and horses participation in sports activities, while the second axis fellows up horse trade from Mosul to India.

Al-tsawif is one of the religious intellectual movements that spread throughout the Muslim world in the third century AH, as an individual trend of asceticism and the intensity of worship within spiritual and philosophical connotations as an antidote to indulgence in luxury, pleasures and loss.
The situation has evolved over the ages, and has been shaped by other patterns. It has acquired the name Sufism, and it was motivated by curiosity to identify this world and its effects in our modern poetry as recipients and readers of poetry. We took from the poetry of Jasim Mohamed Jasim Al - Ajja, a model for working on some of his poetic texts that bear these features.

The aim of this research is to identify the effects of punishment on students in primary education, to identify the quality of punishment that is a cause of school dropouts, and to identify alternatives to degrading corporal and verbal punishments that pose a threat to students in primary education. . The researcher used the descriptive approach to his research.
The community of this research represented the teachers of the primary schools in a number of primary schools in Mosul (Estbana). It responded to 64 teachers and teachers, and 50 students responded from the primary stage. The tools used in this research are:1-Interview; 2- Questionnaire.

A book (Kharidat al-kasr  wa-jaridat  al- asr)by Imad al- Din-Asfahani  (1199 A.D/596 A.H) is one of the important  historical  books that  included  the poets after fifth A.H century and contained  Mosulians  biographies. It was thirty eight.The  poets careers  and jobs varied  but poetry brought them together.Imad  al-Asfahani  mentioned  part of his personal  biography. distinguished this biographies  with  its size and a size of the poetic verses ,the  poetic  purposes and resources  were varied  and many other  features in this book the  writer  relied  on oral narratives mainly and written sources secondly.